A non-plagiarizing tribute to the novel AT SWIM, TWO BOYS by Jamie O’Neill

soon to fight for Irish freedom,

rising to expel the British:

he shakes from his hazel eyes,

tossing his head to meet the world,

honors in school for Latin,

reading of heroes in ancient times,

A lad from a Catholic home,

he used to bind his hands with the rosary

not to fetch himself,

bottling his lust into fever

till his father and brother heard his moans

you can’t sell sweets in the shop lying sick."

Arthur’s reluctant to act his passion

laboring son of the poorest folk,

who donned a kilt with him at school band,

to stave class bullies off Gavin the new boy,


but now, alone with each other,

(word’s gone out of Rebellion delayed)

an Easter morning sunny and cool,

they swim the sea near Dublin,

their bodies only as nature created –

They’ll carry them up the hill of new grass

but throw them aside to race about,

members bouncing and leaping, Gavin ahead.

At last out of breath, they drop to the land.

Alongside each other, on their fronts,

what work they’ll do in free Ireland,

Gavin a postman, Arthur a teacher,

living together of course;

enemy boys in school they fought:

"When O’Connor sneered at our so together

I saw your fist come out same as mine,

you’re the man for me, Arthur McNally – "

"And Gavin, we decked him, Monahan too;

and thanks to the priests, they’ll keep away."

"Why God made priests, you muddy red mop-head,

also for tickling us on the sly – "

Now Gavin turns on his right to face Arthur,

nudging his pal to lie on his left.

but when Gavin’s fingers walk up his friend’s thigh

to fondle his desire,

Arthur protests, and he lets go.

Please touch me face and tell me you love me."

"Arthur, I love you," and tenders his palm

on the cheek and brow of his auburn mate,

mussing and smoothing his hair.

"I love you meself, Gavin McCall.

Bit nervous about today I was,

bit nervous where it would lead,

and now I feel brought down to rest."

"Well Arthur, come to me arms, sleep so."

His drowsy lad he softly cradles,

gazing the water to lull his passion.

Naked they lie, alone on hill-meadow.

They speak of Ireland’s liberty battle.

Will he take Arthur to see his commander

in time for them to march side by side,

silently fearing the fight, who’ll die like a man:

"You’ll join me in battle?

Arthur McNally, you danger yourself,

A teacher of Latin you want to be?

then keep in school, prepare so –"

"Laddie, no tears, I’ll write you me place,"

an arm round the mop-head’s milkwhite shoulders....

Sea and hill, the quiet around,

invite them to taste a last day of peace.

held warm and tight by his black-haired Gavin –

will such a moment be theirs again? –

and solemnly offers himself to his friend,

who gently warns it may hurt.

"Now think to kiss me before you come in."

"Glory be!" shouts Gavin; and when he does enter,

the pain to hazel-eyed Arthur is brief,

allayed by the taste and touch of his man.

but Arthur says wait, let me hold this feeling.

they surge with love, groins pressed together,

their eyes all afire, another kiss panting 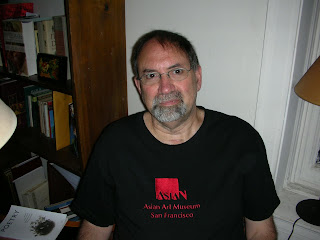 editor's notes: This poem was originally published in August of 2008; Poet Barry Frauman has revised it and here it is, re-presented and represented in its intended entirety.
-Russell
Posted by O Sweet Flowery Roses at 7:38 PM

December report: many shades of many greys

This is Russell. I haven't updated OSFR in a while, and here's some explaination to that:

1.) Side project: Good Hurts. It's a hot sauce review website. It's a different kind of fun than OSFR in that it's 100% in my own control and up to me to update, work on, et. al. As long as there is hot sauce and I have a camera, Good Hurts lives. No need to prod or seek out submissions. Check it out, why don'ch'a? ? ?Stay spicy.

2.) I'm actually going to be teaching a course I've designed, Frontiers of Poetry, here in Iowa. It's mostly about emerging internet poetry and communities, with looks at more experimental contemporary stuff. If you'd like your site or poems included in the couse syllabus (it's 5 weeks long, but fierce!), go ahead and email me.

"I  have been published recently in the Georgetown Review, The Pinch,  South Carolina Review and The Pedestal. with work upcoming in Poetry East and Big Muddy."

The commercial tells me that it’s all here and

I’m beginning to believe it. Its plush leather

seats, its acres of leg room...I could live in

this car. I can turn the key and the world

rumbles on all side of me. I can switch on the

headlamps and it’s a light like a god’s light.

And there’s the radio...any song, any style,

any volume with just a few flicks of the

wrist. And it doesn’t matter that I’m alone.

With my hands on the wheel, I’m all I need.

It doesn’t take another soul to tell me

I can get from here to there just by pointing

this thing. I don’t have to hear “turn to the

It’s almost unconscious the way I get where

I’m going and I like that. And even better,

the driving there is usually the destination.

You can’t beat it. Wherever I am can’t be better.

I’m in a car and I’m cruising. You sure can’t

be in your own body this good.

I have the laughter sickness.

so insert tubes in me,

weigh my belly down with pills.

So many yuks at work,

I may never take

in desperate need of operating table

Cut my heart out.

left, right and funny side.

Lasers to the eye,

probes down the mouth,

put me back on the machine.

Life, I think you call it.

Snap of twig on the trail.

Get me that would you.

when the breeze is blowing.

for any two of these chocolates.

the manna of bedside manner.

Lean over and kiss me.

I promise my germs will stay put.

And I’d love that hardy root

that juts out from the cliff,

one hand reach from the summit.

I’d love to read the inscription

at the top of the water tower.

You only brought yourself?

Then how about touch.

That’s what I miss most just lying here.

A soothing hand on my forehead.

And fingers tangled in mine

Sure nurses being me pills.

But pills don’t bring me nurses.

Posted by O Sweet Flowery Roses at 9:11 AM