The DJANGO Award submissions are trickling in, but you -yes, you- still have a chance at the bag of jewels. Now is the time to strike; lots of superfluous Oscars were handed out last night, so why not win a meaningful, prestigious award to show'em how it's done?

That's right. O Sweet Flowery Roses went there. DJANGO submissions close on April 1, 2009. In the mean time, enjoy this poem by the mysterious James Dye, who left no bio, no picture, and but one poem, certainly befitting the spirit of the DJANGO Award:

The woman is a beautiful virgin, the loneliest in all of the land. Her hair flows down the mountain reaches the beaches and the sand. Her cheeks are ornaments, her neck a string. For the director; the song "Lilies" she'll sing. Like jewels, eyes veiled like doves in the skies. A full moon shines off the brightness of her eyes. Sandaled feet travel down the path from Village. She fills jugs with precious water pillaged from an earthen tower. Beloved turns, tends to a fig tree, waters it and returns to the heart of a dying valley, waters and returns. Evil Eyes tend to her lovely figure. Jealous woman despise to disfigure, her gemstone thighs, put a blemish in her eyes. And how lovely, O love, that men will kill to steal for a look behind the silken veil at her will. Why is she any better? The fig tree blossoms give off her fragrance. The flowers wither as she's picked quickly, swallowed, overcome with wine. The land is invaded by Pagans and ring-nosed swine. She is wise but they are harsh, evil. Silver and gold acquires her sensual delight, a slave in harem, a concubine, in plight. Beloved turns and tosses day at night. They make pinnacles out of her gems, gateways out of her beryl and her stones become a wall, the most beautiful property in the land of them all. "Arise and come away with me!" says Knight. She gives herself into his hands, stripped. Becomes the King's nurse and serves him. Follows the path of flocks, and herds men. For the director; she sings the tune of, "Lilies" a love song. A heart is stirred. She is given Zion, the most beautiful of words. A fair garland; crowned, as awe inspiring as armies. Men from all around come to see her, a diadem of remnants, and they feast on the finest flour, silken honey, every hour adorned in gold, clothed in the embroidery of royalty. “Wake up! Wake up! Zion is doomed to destruction. The dress, the jewels, the gold, eye shadow, nothing,” someone told her. The lover spurns her, wants to kill her. The tree is set on fire. It blazes with a mighty roar. The branches are good for nothing. The land is ruined. Trampled into desolate wastes, swarmed by stinging flies, her chambers are destroyed, pavilions tore down, her eyes. Her tears say, "I am perfectly beautiful." Her roots dig deeply down to plentiful waters. Her branches are a forest of shade. Top reaches the clouds. The trees envy; hear but don't listen
Posted by O Sweet Flowery Roses at 8:00 AM 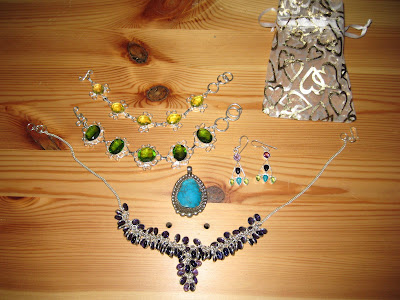 O Sweet Flowery Roses' one-year-of-existence anniversary is coming up, and what better way to celebrate than to present to you our first-ever DJANGO Award! The Dazzlingly Jewel'd And, Naturally, Gloriously Official Award is a contest open to any poet up until APRIL 1st, 2009. The award, an honest to goodness bag of hand-crafted jewelery donated by OSFR alum and artist of all trades Shannah Schilit, will be judged by the OSFR staff and guest judge Sean Lyman Frasier. The rules are simple: please submit one poem about/responding to/invoking the theme TEMPTATION. After all, what's more tempting than a bag of jewels for you or yours? There are no restrictions on length, form, meter, etc. The deadline is April 1, 2009. Please send just one poem and a short author bio, including postal and email addresses to: djangoaward@gmail.com What other poetry journal keeps whets your appetite for both emerging poets and poetics AND shiny, shiny bling? Submit to this contest now! -Russell Jaffe Editor-in-Chief
Posted by O Sweet Flowery Roses at 6:42 PM 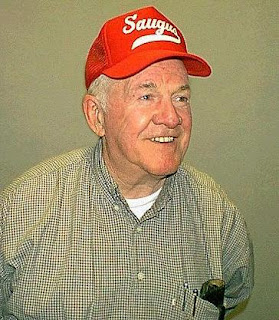 Tom Sheehan served in Korea, 1951-52 and has published 13 books. Brief Cases, Short Spans, short stories, was published November 2008 by Press 53, and From the Quickening, another collection, was published this month by Pocol Press. His Epic Cures, a short story collection, earned a 2006 IPPY Award. A Collection of Friends, was nominated for Albrend Memoir Award. He has nominations for ten Pushcart Prizes, three Million Writers nominations, and a Noted Story of 2007 nomination, and received the Georges Simenon Award for Fiction He has hundreds of Internet appearances, with 50 stories currently posted on Rope and Wire Magazine, publishers of western cowboy stories, and six consecutive print issues of Ocean Magazine. He meets again soon for a lunch/gab session with pals, the ROMEOs (Retired Old Men Eating Out, 93/80/79/78). They’ve co-edited two books on their hometown of Saugus, MA, sold 3500 to date of 4500 printed and he can hardly wait to see them. They’ll each have one martini, he’ll have three beers, and the waitress will shine on them.

At four, near dawn, resident with trees, a mountain’s

wind song, a moon that clashed with clouds perky

as lambs, friends loving behind me though six feet

apart at times, I pissed off the wide porch down into

again, crisply, this way and that, on the quick glass

of leaves. The sound stole, even for a moment, all

the moon and the cool threat of snow.

But at the last shattering of a leaf, at the end of beer

talk, I was the aggregate of selves knowing Apple

Pine Mountain, was constant and one, a kind of

uniform loneliness with stars punching down their

pneumatic cries, the million years of their dying

that one would hear their voices.

Oh, I heard, between trees and close shadow burst,

between the thrills of impulse, between molecules,

the significance of sound. Oh, I listened, my friends,

I listened and grew dizzy because I heard, from stars

by way of clouds, from loam by way of blade and leaf,

from every joint and joist of the cabin, after pissing

off the porch, love.

on an old nail

Dillinger, On His Way Into The Movies

Posted by O Sweet Flowery Roses at 7:29 AM